The seeds of today’s The Hayner Public Library District began with the Alton Library Association, which originated in 1852 and was supported through private funding. The Association was bought at auction in 1866 by a group of “concerned ladies” of Alton when the Association began to fall apart due to indebtedness. These ladies raised the funds to pay the library’s $165 debt and purchase $300 worth of new books. A corner room of the City Hall building was secured for library use. Under the ladies’ management, the library prospered from the start. The ladies believed it was the library’s mission to provide intellectual culture via “high grade” literature and to contribute to the social life of the city. They sponsored a series of entertainments including lectures, dramas, concerts, suppers, fairs, and more. Many of the lecturers were of national reputation and included among others Horace Greeley, George Alfred Townsend, and Ralph Waldo Emerson.

In the winter of 1888, it became apparent that the Library was outgrowing its quarters and needed its own building. That same year saw the death of Jennie D. Hayner, a major director of the Library Association. It was her husband, John E. Hayner, who purchased the lot on 4th and State Streets, then funded and built the Library as a memorial to his wife. Construction of the Hayner Memorial Library, today the Genealogy & Local History Library, was completed in 1891. The architect for the building was none other than Theodore C. Link, designer of the Union Station Railroad Depot in St. Louis, Missouri. The total cost for the building, including an annex added in 1906 by Hayner’s grandson, John A. Haskell, was $33,000.

In the spring of 1901, Andrew Carnegie offered to build a Carnegie Library for the City of Alton; the offer was respectfully refused on grounds that the new Carnegie library would charge a tax on all citizens and the Alton Library was meant to be free to all Altonians. Mr. Hayner’s benefaction allowed Alton citizens to enjoy the only free library in the country, wholly under the management of the ladies of the Jennie D. Hayner Library Association, previously the Alton Library Association. (Carnegie did eventually contribute to the establishment of a library for Shurtleff College in Upper Alton). 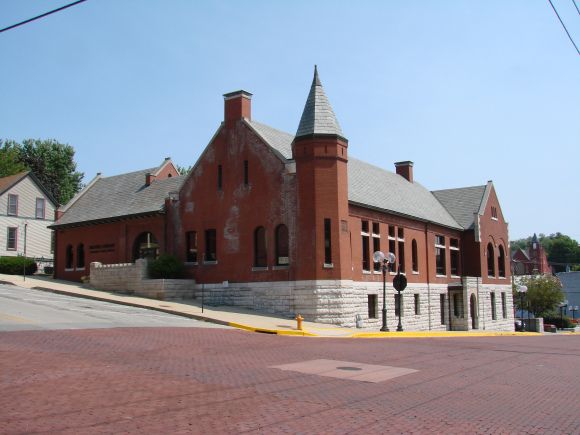 As the years progressed, the library grew dramatically. Correspondingly, the costs to maintain and staff the library escalated. In 1952, the city council voted unanimously to acquire and operate the Hayner Memorial Library as a public library. In 1972 the voters approved a referendum that established The Hayner Public Library District. This meant that the library would be run by its own governing board. Today, the District includes the Downtown Library at 326 Belle Street, the Genealogy & Local History Library in the original building, and Hayner Library at Alton Square Mall.